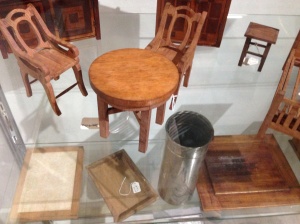 This photo from the museum at Trial Bay Gaol at Arakoon near South West Rocks during World War I shows a small sample of the fine craftwork created by the “enemy aliens” (as they were called.) There were exhibitions and displays within the gaol of such work, as well as photographs and paintings.

This creativity was undertaken as a way to dispel boredom in the gaol. The Germans had many business activities including cafes, trades, a canteen, restaurant and market gardens. They also pursued avenues of self-improvement like educational classes (languages, maritime subjects, business etc), as well as recreational activities like sport, swimming, fishing and producing theatre and orchestral performances.

In my book ‘Run Away Home’, a main character Gustav Becker is involved in sport and theatre productions, as well as earning an income as a watchmaker.

He has a secret romance with a local girl – and the consequences of this love affair have tragic consequences through the generations which collide in a exciting climax with Stella, our contemporary teenage runaway.

What do you think? Cancel reply 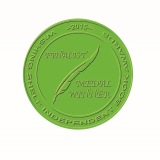 Add my books to Goodreads

Member of Alliance of Independent Authors

Author of THE NEVERLAND WARS and other Young Adult works

It's time to get hella serious about writing!

Stories From The Field

Keep up to date with the work of international disaster relief agency, ShelterBox's work around the world

The latest news on WordPress.com and the WordPress community.

take on the YA / NA literary world

I write from a castle in a flying city hidden by a thundercloud.